It was always a good bet that the draft Investigatory Powers Bill would broaden data retention obligations to cover more categories of communications data. That was at the core of the Communications Data Bill, blocked in 2012 during the Coalition government and vowed after the May 2015 election to be resurrected.

The draft Bill has duly delivered, accompanied by a blizzard of commentary about the propriety of forcing communications service providers to retain users’ browsing histories.

But what exactly are the categories of data that communications providers could be made to keep? The Home Office has coined the label ‘internet connection records’ to describe the new datatypes that it plans should be retained for up to 12 months. These records, it stresses, could include websites and services visited but not individual pages or other content. This is in line with what the Home Office had previously said to the Anderson Review about ‘weblog data’ (the then current jargon for browsing histories).

Internet connection records and the proposed restrictions on accessing them (clause 47 of the draft Bill) have become a lightning rod for the ensuing discussion: not just the rights and wrongs of requiring browsing data to be retained, but whether internet connection records as defined in the draft Bill can be matched to real categories of data processed by service providers.

According to the draft Bill’s Explanatory Notes, one of those six categories (71(9)(f)) corresponds to internet connection records. That leaves five categories which, on the face of them, seem to go wider than the existing data retention categories under the Data Retention and Investigatory Powers Act 2014 (DRIPA) as amended by the Counter Terrorism and Security Act 2015 (CTSA).

We can get an idea of the scope of ‘relevant communications data’ by appreciating that it covers any type of communication on a network, expressly including communications where the sender or recipient is not a human being. This sweeps up not only background interactions that smartphone apps make automatically with their supplier servers, but probably the entire internet of things.

The type of data about these communications that could be required to be retained goes beyond the relatively familiar sender, recipient, time and location information to data such as the ‘type, method or pattern’ of communication (clause 71(9)(c)). ‘Data’ is defined to include ‘any information which is not data’ (clause 195(1)).

In another departure from existing retention laws, providers could be required to generate data specifically for retention (71(8)(b)(i)). At present they can only be required to keep data that they already generate or process in the course of providing their service.

Another change from existing law is that retention notices could be given to any kind of telecommunications operator, not just those providing services to the public as under the existing legislation. Finally, providers could be given a notice requiring them to install specific technical capabilities to support communication data access and retention requirements.

All this suggests that it is fairly important to understand what ‘relevant communications data’ might consist of.  That requires an informed conversation between legislators, lawyers and technical experts. As a discussion aid, here is my map of the 14 interlinked definitions that go to make it up. 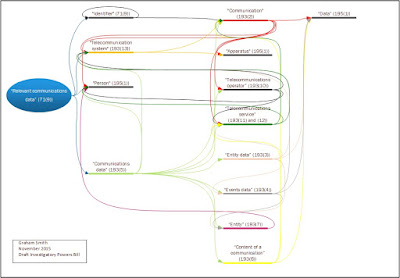 And here are the 14 definitions. Where a definition uses another defined term I have italicised it for ease of reference.

In this subsection “identifier” means an identifier used to facilitate the transmission of a communication.

“Telecommunication system” means a system (including the apparatus comprised in it) that exists (whether wholly or partly in the United Kingdom or elsewhere) for the purpose of facilitating the transmission of communications by any means involving the use of electrical or electromagnetic energy.

“person” (other than in Part 2) includes an organisation and any association or combination of persons,

“Communication”, in relation to a telecommunications operator, telecommunications service or telecommunication system, includes—
(a) anything comprising speech, music, sounds, visual images or data of any description, and
(b) signals serving either for the impartation of anything between persons, between a person and a thing or between things or for the actuation or control of any apparatus.

“apparatus” includes any equipment, machinery or device (whether physical or logical) and any wire or cable,

“Telecommunications service” means any service that consists in the provision of access to, and of facilities for making use of, any telecommunication system (whether or not one provided by the person providing the service).

“Events data” means any data which identifies or describes an event (whether or not by reference to its location) on, in or by means of a telecommunication system where the event consists of one or more entities engaging in a specific activity at a specific time.

“Entity” means a person or thing.

“data” includes any information which is not data.