Big Brother Watch has this week published the results of its research, conducted via freedom of information requests to police forces, into charges and cautions under two communications offences: Section 127 of the Communications Act 2003 and the Malicious Communications Act 1988.

The report ‘Careless Whispers’ finds that for the three years November 2010 to November 2013 at least 4,259 people were charged and at least 2,070 cautioned under the two provisions, nearly two thirds of which were under Section 127.  At least 355 of these cases involved social media.  The proportion involving social media is on the increase.

BBW's conclusions are twofold: that these offences were designed for one-to-one communications such as post and telephone, not for the one-to-many communications typical of social media; and that they are out of date and the law needs to be reformed.

Section 127 has two limbs. It is an offence for someone to send by means of a public electronic communications network a “message or other matter that is grossly offensive or of an indecent, obscene or menacing character”. It is similarly an offence if someone “for the purpose of causing annoyance, inconvenience or needless anxiety to another” sends “a message that he knows to be false”.

Section 127 applies to all internet communications, public or private, one-to-one or one-to-many. That is because when you send a tweet, post something to Facebook or send an e-mail the communication will travel across a UK public telecommunications network that carries internet traffic.  Section 127 catches that communication, regardless of whether it ends up in someone's private mailbox or published on a social media platform.

Some may argue that exactly because the internet and social media are 'one to many' the communications can be more damaging, and stricter content prohibitions should apply than to private communications.  Others will say that individual freedom of public expression is a major advance wrought by the internet that should be defended at least as jealously online as offline.  There is a debate to be had about that.  What is beyond doubt, however, is that Section 127, and its application to social media, is the result of historical accident not conscious design.

Section 127 goes back at least to the 1935 Post Office (Amendment) Act. The first limb, including ‘grossly offensive’, was designed to deter telephone users from being abusive to telephone operators*; the second to catch senders of distressing hoax telegrams. Instances of malicious or even fraudulent hoax telegrams were known from at least the early 20th century.

In fact the first limb of Section 127 can be traced back even further than 1935, to the Post Office (Protection) Act 1884. Here is the ancestry of the section, focusing on the origin of 'grossly offensive'. 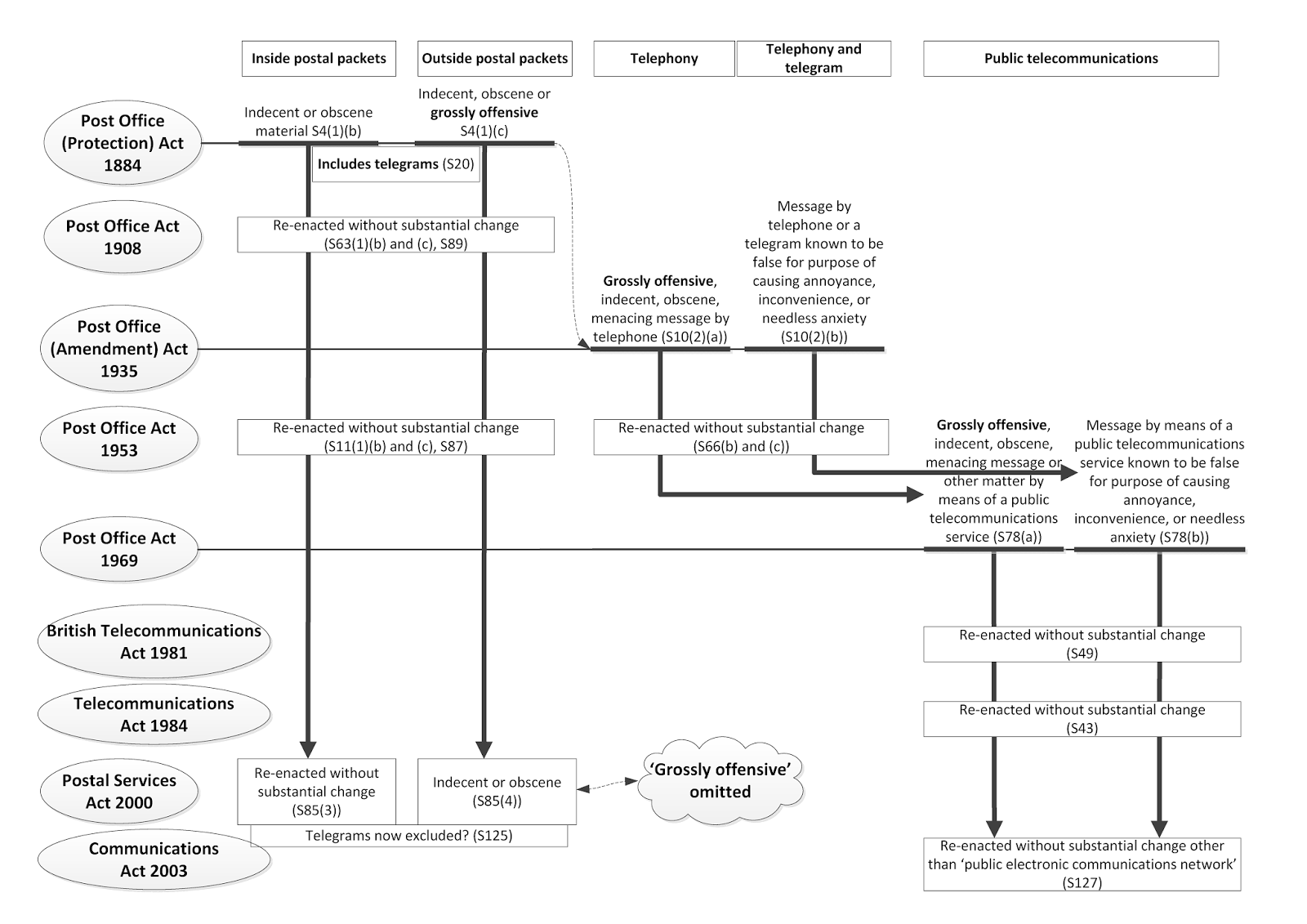 'Grossly offensive' originated in 1884 as part of a prohibition on material on the outside of postal packets (including telegrams). At the outset an M.P., Charles Warton, voiced concern in Parliament about what might be caught:

"… many people—even many Members of that House—frequently sent letters through the Post with very amusing pieces of scurrility upon them. … under this clause, a very heavy liability might attach to it. … it might happen that one man would use words—for instance, he might write "swindler" or "liar" upon the outside of a letter—which were not really indecent or obscene, only what they would call vulgar, and see what a tremendous penalty the clause imposed for that—imprisonment for 12 months."

In the event the MP's fears were borne out in 1913 when one John Cole was convicted under the 1884 Act at Leeds magistrates after sending postcards to various local officials, calling a well-known local alderman an 'insurance swindler'. This was found to be grossly offensive.

The prohibition on ‘grossly offensive’ material on the outside of postal packets remained unchanged until the Postal Services Act 2000.  By that time the legislative line of descent had forked.  While 'grossly offensive' was removed from the postal packets offence, it remained in the telephony provision. That was widened to cover messages sent by public telecommunications services in 1969, then amended to 'public electronic communications network' in 2003.

It is not clear why in 2000 "grossly offensive" was removed from the prohibition applicable to the outside of postal packets, but not removed from what in 2003 became Section 127.

Section 127, in particular, has long been a cause for concern. It lays down stricter prohibitions online than would apply offline.  It can criminalise activities, such as sharing a photo with friends via smartphones, that would be legal if done face to face.

During the debate on the 2013 Defamation Bill the government minister said: "An individual should be charged and prosecuted for the offence they commit, irrespective of whether it happens in the street or in cyberspace”. This is the hallowed mantra that what is illegal offline should also be illegal online.

But if we are serious about that, the converse should also apply: if it is not illegal offline it should not be illegal online. With Section 127 that is patently not the case.  It sweeps up more than the offline offences. It can lead to incidents such as last year’s prosecution (apparently under Section 127) for sharing a photo of a police officer decorated with cartoon penises.

The notorious Twitter Joke Trial was a section 127 prosecution, albeit that it ultimately failed. The Director of Public Prosecution’s social media prosecutorial guidelines, while welcome, are no substitute for appropriately formulated legislation.

By way of a historical footnote, the Twitter Joke Trial was not the first occasion on which a joke communication has landed the perpetrator in hot water with the criminal law. This incident from 1924 could have graced the pages of PG Wodehouse.

In January 1924 the Rev. Walter Karran, a curate on the Isle of Man, pleaded guilty at Liverpool Police Court (under pre-1935 legislation) to uttering a forged telegram (or to aiding and abetting the same – reports vary).  The following account is based for the most part on the report in the Dundee Courier of 25 January 1924.

The Rev. Karran had been travelling to Liverpool from the Isle of Man. He suggested to a fellow-traveller on the ferry, Miss Alice Winstone, that he should send a telegram to his Bishop purporting to be from the then Prime Minister, Mr Stanley Baldwin. He then wrote the following message which he asked her to send from the telegraph office in Liverpool, giving her the money to pay:

The Bishop received the telegram and hastened to Liverpool, where he knew that Baldwin was speaking that day, but discovered on arrival that he had been hoaxed. The Bishop was meant to be moving the Church Enabling Bill in the Manx Legislative Assembly, which had to be postponed due to his absence. The Bishop had thought the telegram must concern the Baldwin Trust, of which he was Chairman.

Following police enquiries the Rev. Karran confessed and took full responsibility. The Director of Public Prosecutions instigated proceeedings. In court counsel, in mitigation, said that the Rev. Karran was a “devoted worker in his vocation, but inclined in lighter moments to take a humorous view of things and to indulge in practical joking”. Miss Winstone was threatened with sea sickness and it was to divert her attention that he suggested the joke. It was rumoured that the Bishop was likely to be offered a bishopric in England and he thought the telegram would be “a very amusing bit of leg-pulling”.

The Stipendiary Magistrate was less amused. The explanation given as to why the Bishop might have thought the telegram genuine “made the so-called joke a singularly offensive one”. It was “incredible to most people that a clergyman could do such a thing”. The Rev. Karran was fined £10 and 25 guineas costs.  A summons against Miss Winstone was withdrawn, she being held to be an innocent party in the episode.

Telegram or tweet, jokes have a tendency to fall flat when scrutinised in the cold light of the courtroom.


*However the Law Commission Scoping Report on Abusive and Offensive Communications notes at para 4.61 that the aim was also to protect the public more broadly. (Footnote added, 4 July 2019.)

Posted by Cyberleagle at 21:18 No comments:

Am I the only one still confused by Clause 17 (now Clause 21) of the Counter-Terrorism and Security Bill?  This is the clause that will extend the communications data retention provisions of DRIPA to cover so-called IP address resolution. I have been wrestling with it since the beginning of December.  The most recent Parliamentary explanations have not lifted the fog.

The second day of the House of Lords Committee stage took place on 26 January. In response to a plea to explain what data might be covered by the clause, the Minister said this:
“The noble Lord, Lord Rosser, asked for examples of access data that may be required. An example is port numbers, which are akin to a house number, where an IP address is akin to a postcode. I know that the noble Baroness, Lady Lane-Fox, could probably give us a tutorial on the technical points; I could probably do with one at some point. Other types of data include the MAC address—the identifier of a particular computer—the time, the location and so on.”

So far, so clear.  It’s about port numbers and MAC addresses.  The Home Office Fact Sheet and the Impact Assessment suggested the same.  But the Minister went on to say:
“Those are the types of data covered by “or other identifier”, and that is set out in the Explanatory Notes which accompany the legislation.”

Clause 21 empowers the mandatory retention of:
“communications data which … may be used to identify, or assist in identifying, which internet protocol address, or other identifier, belongs to the sender or recipient of a communication (whether or not a person)”

An identifier “means an identifier used to facilitate the transmission of a communication”.

If the clause does (as the Home Office clearly intends) empower mandatory retention of port numbers, it is because they can assist in linking an IP address (or other identifier) simultaneously used by thousands of ISP customers to one customer device or connection – not because a port number is itself an 'other identifier'.

I can see nothing in the clause that provides a power to require port numbers or MAC addresses to be retained on the basis that they are ‘other identifiers’.

This does add spice to the question what is ‘other identifier’ doing in Clause 21 at all, when the issue that gave rise to the clause was about simultaneous IP address sharing?  A clear explanation of Clause 21 would be helpful. Even better, the government could start again with a redraft that is specific about what the clause is aiming to achieve.