Right now the ECommerce Directive – or at any rate the parts that shield hosting intermediaries from liability for users’ content - is under siege. The guns are blazing from all directions: The Prime Minister’s speech in Davos, Culture Secretary Matt Hancock’s speech at the Oxford Media Convention on 12 March 2018 and the European Commission’s Recommendation on Tackling Illegal Content Online all take aim at the shield, or at its linked bar on imposing general monitoring obligations on conduits, caches and hosts. The proposed EU Copyright Directive is attacking from the flanks.


The ECommerce Directive is, of course, part of EU law. As such the UK could, depending on what form Brexit takes, diverge from it post-Brexit. The UK government has identified the Directive as a possible divergence area and Matt Hancock's Department for Digital, Culture, Media and Sport (DCMS) is looking at hosting liability.
The status quo


Against this background it is worth looking behind the polarised rhetoric that characterises this topic and, before we decide whether to take a wrecking ball to the Directive's liability provisions, take a moment to understand how they work.  As so often with internet law, the devil revealed by the detail is a somewhat different beast from that portrayed in the sermons.
We can already sense something of that disparity. In her Davos speech Theresa May said:
“As governments, it is also right that we look at the legal liability that social media companies have for the content shared on their sites. The status quo is increasingly unsustainable as it becomes clear these platforms are no longer just passive hosts.”
If this was intended to question existing platform liability protections, it was a curious remark. Following the CJEU decisions in LVMH v Google France and L’Oreal v eBay, if a hosting platform treats user content non-neutrally it will not have liability protection for that content. By non-neutrally the CJEU means that the operator "plays an active role of such a kind as to give it knowledge of, or control over, those data".


So the status quo is that if a platform does not act neutrally as a passive host it is potentially exposed to legal liability.
By questioning the status quo did the Prime Minister mean to advocate greater protection for platforms who act non-neutrally than currently exists? In the febrile atmosphere that currently surrounds social media platforms that seems unlikely, but it could be the literal reading of her remarks. If not, is it possible that the government is taking aim at a phantom?
Matt Hancock's speech on 12 March added some detail:


"We are looking at the legal liability that social media companies have for the content shared on their sites. Because it’s a fact on the web that online platforms are no longer just passive hosts.
But this is not simply about applying publisher or broadcaster standards of liability to online platforms.
There are those who argue that every word on every platform should be the full legal responsibility of the platform. But then how could anyone ever let me post anything, even though I’m an extremely responsible adult?
This is new ground and we are exploring a range of ideas… including where we can tighten current rules to tackle illegal content online… and where platforms should still qualify for ‘host’ category protections."
It is debatable whether this is really new ground when these issues have been explored since the advent of bulletin boards and then the internet. Nevertheless there can be no doubt that the rise of social media platforms has sparked off a new round of debate.


The activities of platforms are often approached as if they constitute a homogenous whole: the platform overall is either a passive host or it is not. Baroness Kidron, opening the House of Lords social media debate on 11 January 2018, went further, drawing an industry sector contrast between media companies and tech businesses:
“Amazon has set up a movie studio. Facebook has earmarked $1 billion to commission original content this year. YouTube has fully equipped studios in eight countries."
She went on:


"The Twitter Moments strand exists to “organize and present compelling content”. Apple reviews every app submitted to its store, “based on a set of technical, content, and design criteria”. By any other frame of reference, this commissioning, editing and curating is for broadcasting or publishing.”
However the ECommerce Directive does not operate at a business sector level, nor at the level of a platform treated as a whole. It operates at the level of specific activities and items of content. If an online host starts to produce its own content like a media company, then it will not have the protection of the Directive for that activity. Nor will it have protection for user content that it selects and promotes so as to have control over it.  Conversely if a media or creative company starts to host user-generated content and treats it neutrally, it will have hosting protection for that activity.


In this way the Directive adapts to changes in behaviour and operates across business models. It is technology-neutral and business sector-agnostic. A creative company that develops an online game or virtual world will have hosting protection for what users communicate to each other in-world and for what they make using the tools provided to them.
The line that the Directive draws is not between media and tech businesses, nor between simple and complex platforms, but at the fine-grained level of individual items of content. The question is always whether the host has intervened at the level of a particular item of content to the extent that (in the words of one academic)[1], it might be understood to be their own. If it does that, then the platform will not have hosting protection for that item of content. It will still have protection for other items of user-generated content in relation to which it has remained neutral.  The scheme of the Directive is illustrated in this flowchart. 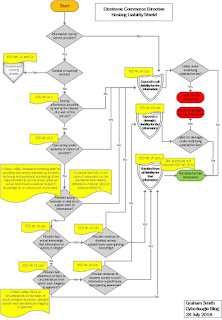 The analysis can be illustrated by an app such as one that an MP might provide for the use of constituents. Videos made by the MP would be his or her own content, not protected by the hosting provisions. If the app allows constituents to post comments to a forum, those would attract hosting protection. If the MP selected and promoted a comment as Constituent Comment of the Day, he or she would have intervened sufficiently to lose hosting protection for that comment.


This activity-based drawing of the line is not an accident. It was the declared intention of the promoters of the Directive. The European Commission said in its Proposal for the Directive back in 1998:
"The distinction as regards liability is not based on different categories of operators but on the specific types of activities undertaken by operators. The fact that a provider qualifies for an exemption from liability as regards a particular act does not provide him with an exemption for all his other activities."
Courts in Ireland (Mulvaney v Betfair), the UK (Kaschke v Gray, England and Wales Cricket Board v Tixdaq) and France (TF1 v Dailymotion) have reached similar conclusions (albeit in Tixdaq only a provisional conclusion).  Most authoritatively, the CJEU in L'Oreal v eBay states that a host that has acted non-neutrally in relation to certain data cannot rely on the hosting protection in the case of those data (judgment, para [116] - and see flowchart above).


The report of the Committee on Standards in Public Life on "Intimidation in Public Life" also discussed hosting liability.  It said:
“Parliament should reconsider the balance of liability for social media content. This does not mean that the social media companies should be considered fully to be the publishers of the content on their sites. Nor should they be merely platforms, as social media companies use algorithms that analyse and select content on a number of unknown and commercially confidential factors.”
Analysing and selecting user content so as to give the operator control over the selected content would exclude that content from hosting protection under the ECommerce Directive. The Committee's suggestion that such activities should have a degree of protection short of full primary publisher liability would seem to involve increasing, not decreasing, existing liability protection. That is the opposite of what, earlier in the Report, the Committee seemed to envisage would be required: “The government should seek to legislate to shift the balance of liability for illegal content to the social media companies away from them being passive ‘platforms’ for illegal content.”


Simple and complex platforms
The question of whether a hosting platform has behaved non-neutrally in relation to any particular content is also unrelated to the simplicity or complexity of the platform. The Directive has been applied to vanilla web hosting and structured, indexed platforms alike.  That is consistent with the contextual background to the Directive, which included court decisions on bulletin boards (in some ways the forerunners of today’s social media sites) and the Swedish Bulletin Boards Act 1998.


The fact that the ECD encompasses simple and complex platforms alike leads to a final point: the perhaps underappreciated variety of activities that benefit from hosting protection.  They include, as we have seen, online games and virtual worlds. They would include collaborative software development environments such as GitHub. Cloud-based word processor applications, any kind of app with a user-generated content element, website discussion forums, would all be within scope. By focusing on activities defined in a technology-neutral way the Directive has transcended and adapted to many different evolving industries and kinds of business.
The voluntary sector


Nor should we forget the voluntary world. Community discussion forums are (subject to one possible reservation) protected by the hosting shield.  The reservation is that the ECD covers services of a kind ‘normally provided for remuneration’. The reason for this is that the ECD was an EU internal market Directive, based on the Services title of the TFEU. As such it had to be restricted to services with an economic element.
In line with EU law on the topic the courts have interpreted this requirement generously. Nevertheless there remains a nagging doubt about the applicability of the protection to purely voluntary activities.  The government could do worse than consider removing the "normally provided for remuneration" requirement so that the Mumsnets, the sports fan forums, the community forums of every kind can clearly be brought within the hosting protection.