All about the metadata

If it is true that granularity of language reflects the importance of the subject matter then metadata, not content, is at the heart of the Investigatory Powers Bill.

The emphasis on metadata is perhaps unsurprising, since the Intelligence and Security Committee told us in its March 2015 report that metadata is indeed more valuable than content to the intelligence agencies in their mission to join up the dots and spot potential malefactors:

The plethora of definitions (not to mention the proliferation of cross-linked sub-definitions) does not make for easy understanding.

In an attempt to untangle the spaghetti heap I have been experimenting with flowchart visualisations of the more significant and complex data definitions. More of that anon.

In general terms the types of metadata obtainable under the bulk interception and interference warrants are broader than those under the powers and bulk warrant for acquisition of communications data.

It can be seen that around half a dozen different kinds of power or authority provide routes for the compulsory retention and acquisition of various kinds of metadata. They all have in common that the Bill’s restrictions on selecting and accessing bulk content (an individual located within the British Islands at the time of selection cannot normally be targeted without a further warrant) do not apply.

This is a diagram of the overall metadata ingestion scheme of the Bill. 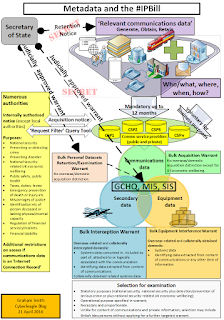 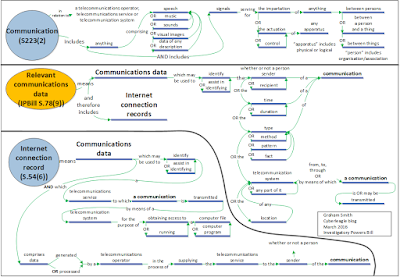 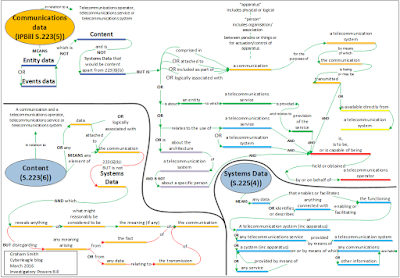 What the definition of content lacks in companions it makes up for in conceptual difficulty.  The Parliamentary Joint Committee scrutinising the draft Bill remarked: 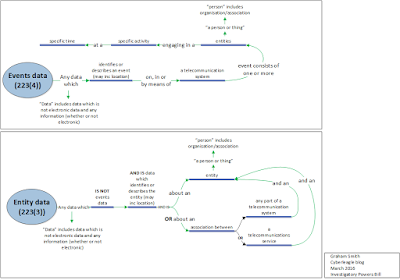 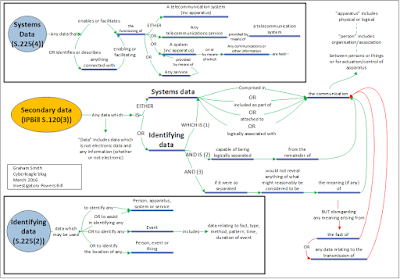 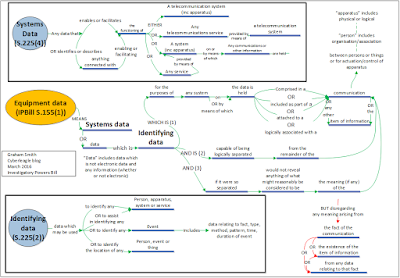 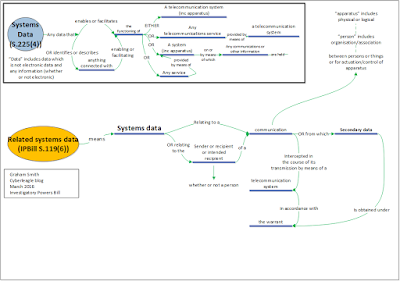 That's all about the metadata.

The chief remaining omission from the visualisations is Protected Material in S.170(9). This is the bulk equipment warrant equivalent of Content. As such it defines the material for which a targeted examination warrant is necessary if it is to be selected for examination by reference to an individual known to be located in the British Islands.

The definition contains a triple negative that presents a considerable challenge to parse and represent graphically. Instead, here is the unadorned raw text to ponder:

Relevant Content crops up in relation to targeted examination warrants in Part 1. It means 'any content of communications intercepted by an interception authorised or required by a bulk interception warrant'.

Intercepted Content, in relation to a bulk interception warrant in Part 6, is defined almost identically: 'any content of communications intercepted by an interception authorised or required by the warrant'.